Branch Based deployment patterns on AWS

AWS provides many ways to deploy your applications to its vast ranges of services using an infrastructure as code approach.

There isn’t always a “best practice” that suits every single service, application workload, developer workflow or tool, however there are some well oiled approaches that have served my collegues and I well over the years, one of which is the “Branch based build” pattern.

In this blog post, I thought I’d strip this back to basics and walk through the pattern, demonstrating it’s objectives and capabilities as it’s something I have taught customers and collegues alike in the past, but never wrote down.

Note: In these, we will be working with AWS CloudFormation, however, this can be implemented with any tool of your choice from the AWS CLI to Hashicorp Terraform.

From Code to Cloud

When cloud engineers use an Infrastruture as code approach for resource provisioning, it is best practice to store this code in a version control system such as git to track its history as you would for any other system or software product.

An added bonus of doing this, is that when combined with further automation such as a CICD tool the code in the git repository can be used to automatically deploy the cloud resources required to run your application.

In the Image below, we demonstrate a set of simple steps in which:

When changes need to be made to the cloud resources, the code can be commited to the repository in which the Jenkins job will then trigger a CloudFormation stack update to update and your resources.

Challenges and the transition to “Immutable infrastructure”

This deploy and update model lends itself well to core infrastructure that have low rates of change, however when it comes to applications, we often find that this can introduce problems as rolling back complex application changes, or testing them prior to deployment can be difficult.

As a result, the concept of immutable application deployments arose.

With immutable deployments, the objective is to never upgrade in place a deployed application and it’s supporting infrastructure, but rather leverage the cloud providers vast resources in conjunction with further automation to provide us the ability to deploy entire copies of the application stack with your changes in place in which you can transition your users to after testing.

Through leveraging this pattern, in the event a problem is found on new versions, you can easily return the users back to the original copy of the application and it’s supporting infrastructure if/when required as it will be running in paralell until you are confident enough that it can be discarded (this is commonly known as blue/green deployment), in addition to this, it also opens the door to new development workflows in which developers can develop and deploy an entire application stack that not just includes the application itself, but the entire supporting infrastructure of virtual machines, operating system configuration, scaling policies, monitoring settings and more.

If you would like to know a little bit more about the concept of immutable infrastructure, I encourage you to check out some of the blog posts and videos below.

So, How can we enhance the development flow to implement this based on the above example ?

This is where the the concept of “Branch based builds” comes into play, in this model, we continue to store all of our code in git, however we configure our CICD tool, in this case Jenkins to take a set of actions whenever a new branch is created and pushed to the repository to provision a unique set of defined resources based on the code in that particular branch.

To make things even better, when the branch is deleted, you could also look to implement the destruction of any provisioned resources associated with that branch that are no longer required.

The image below visualises this workflow, each branch of the application repository has deployed different variations of cloud resources based on the Cloudformation Template contained within it. 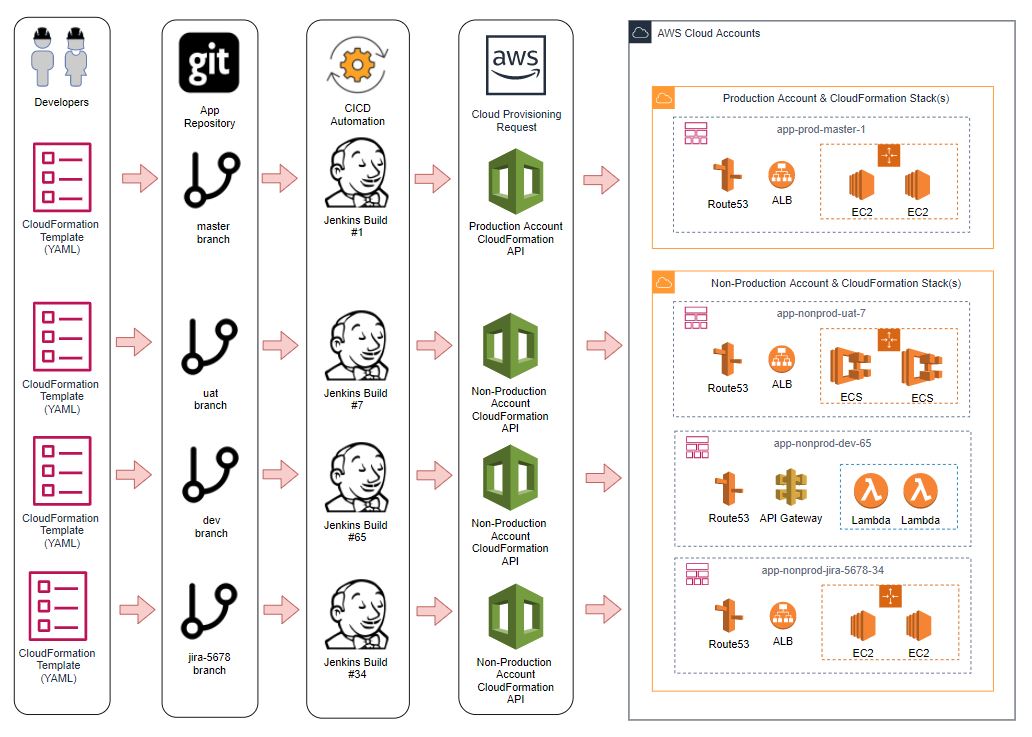 So what do we need to do first to acheive this pattern ?

The first thing we need to do is to introduce some new parameters into our CloudFormation Template.

Parameters enable you to input custom values to your template each time you create or update a stack.

In this case, we will be introducing the following

When provisioning resources in your AWS account it is a good practice to define and adhere to a resource naming standard. Using the above Parameters, we will create all resources with the following naming convention.

In the below code, I demonstrate how this has been implemented for a Load Balancer and corrosponding Route53 DNS Record.

Note: Be aware that each AWS Service has differing naming standards and boundaries, as such you may need to adjust this naming convention slightly to suit it, such as replacing dashes with underscores, etc

As you can see in the template, I also opted to assign tag values to the resources that match the parameters we pass in.

In doing this we can more effectively track resources in the account as well as get metrics such as how much cloud resources a particular feature branch cost from your detailed billing metrics reports.

You can find more out about this functionality below

The final step before moving onto the CICD component is defining a CloudFormation Stack name format.

Standardising the stack name format will allow us to ensure that there is no name collisions at the CloudFormation deployment layer and keeping them consistent with resource names means we can easily map created resources back to stacks as well as programatically discover and destroy them if/when required.

In this example, we will follow the resource naming convention, and create stacks with the following standard

Tying it together with CICD

Once your template has been updated, we can start on the automation of the deployment itself using a CICD Tool, in this case, we will use the ever popular Jenkins.

The installation and configuration of the Jenkins server is out of scope, however the following steps need to be completed and I suggest reading the Getting Started Guide first

When this is done, we now introduce a Jenkinsfile into our repository that contains steps to deploy our CloudFormation template whenever this branch is pushed.

A sample Jenkinsfile is provided below that defines a set of stages that will execute when the branch is pushed to the repository, these are:

And there you have it, a quick branch based build solution with minimal changes to your code !

The branch based build pattern provides a easy stepping stone into automation with AWS and is well suited for stateless applications on EC2 that are frontend with load balancers such as squid proxies, however with greater automation and orchestration, in conjunction with snapshots, it can be effective for stateful workloads that leverage EBS volumes and RDS databases as well.

However, do keep in mind that some services don’t lend themselves well to this approach for release management, providing their own preferred build and deployment workflows, and it is important to research and evaluate these in when implementing your solutions.